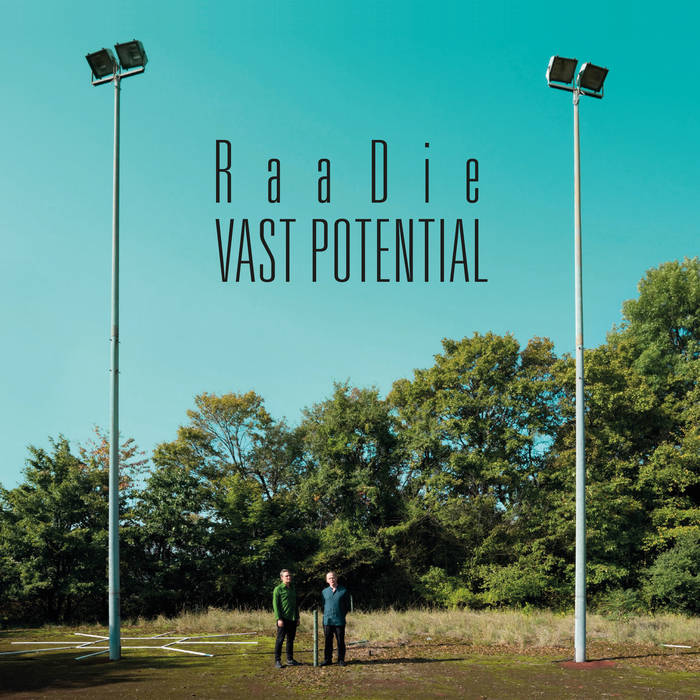 Rich Hims So many albums are described as Summer playlists, Vast Potential feels more like Spring, with a relaxed vibe leading to energetic bursts that still manage to promise greater complexity to come Favorite track: Unterwasserfische.

Have you ever heard an album of trumpet and e-zither? For more than ten years Lorenz Raab and Christof Dienz have been playing shows together irregularly. In 2008 they released an EP with four mostly improvised, live-recorded pieces. Around two years ago they decided to record their first studio album as a duo. They placed just as much importance on thorough elaboration of their compositions as on the joy in improvisations.

The pieces on Vast Potential surprise with a richness in tonal colors, which results from clever use of electronic effects and loop station. In the first piece of the album, “Perlentaucher“ [Pearler], Dienz already transcends the original sound of the zither into the ethereal and weaves a fine rhythmic fabric that supports the lyrical melodies of the trumpet. A brief, chorus-resembling phrase and a short passage in unison reinforce the song-like character of the composition. In the following “Vast Potential“ the zither buzzes like an Indian tanpura, grounded by long bass notes. Shortly thereafter the piece changes to more rhythmic movement and pointedly placed single notes, a funky bass line and light beats form a groove that inspires dancing motifs from Raab’s trumpet.

Spacey, electronic seeming and crackling sounds are the basis for the quiet „Flora“, whereas „Unterwasserfische“ [Underwater Fish] develops rhythmic character through multilayered zither patterns in varying tempos. In an onomatopoeic manner, small, flowing motifs illustrate a cheerfully colorful underwater world, while the trumpet floats loftily like a manta through the dense bustle. “Sommer im Winter“ [Summer in Winter] sounds more contemplative than the title suggests and here the zither’s arpeggios are reminiscent of a classical guitar. In the following track “On the Other Side” however, it creates a dark, almost eerie atmosphere with long notes in the style of Scandinavian electric guitarists. This returns briefly once more in the piece “Subtle Sand”, which most decisively tends towards an electronica aesthetic. Of course Raab also contributes many facets to the duo’s broad cosmos of sound by playing his trumpet sometimes with dark timbre, sometimes rich in overtones, letting it sing jazzily with mutes or creating poetic and melancholically tinted moods through warmer timbre.

Christof Dienz, born in 1968 in Innsbruck, began as a classically trained bassoonist, in 1992 he was a founding member and driving force of the neo-folk-jazz octet Die Knödel [The Dumplings] and played in the orchestra of the Wiener Staatsoper [Vienna State Opera] from 1997 to 2000. Through a composing job in 2001 he came in touch with the zither, “which I then taught myself using my own playing technique.” In the following years he cherished a passion for improvised and contemporary music and repeatedly also composed for theatre. Besides Prokovjew, Ravel and Schubert, Dienz also names Prince, AC/DC, Björk and Xenakis as sources of inspiration.

Lorenz Raab, born in 1975 in Linz, began as a student in the local brass band of Rainbach, which was directed by his father. At the age of 14 he went to the music college of Vienna and from 1997 to ’99 studied at the Bremer Trompetenakademie [Trumpet Academy Bremen], among others with Kenny Wheeler and Ingrid Jensen. Back in Vienna he switched from jazz to classical music again and since 15 years he’s been playing a diverse repertoire at the Volksoper Wien [Vienna People’s Opera] with pieces by Strauss, Stravinsky and Bernstein. In addition, Raab has recorded various jazz albums, in a duo with pianist David Helbock, as well as with his quartet, which has varying line-ups gathering Michel Godard (tuba), Lucas Niggli (dr) and Erik Hegdal (sax) or Niggli, Matthias Pichler (b) and Matthias Löscher (git). As a teenager, he already listened to a lot of different types of music, Raab says, and apart from the Beatles, U2 and Queen, also lists Bach, diverse jazzers and Led Zeppelin as his influences.

Beside the stylistic openness, Raab and Dienz share a typical Austrian humor, which flashes up repeatedly between the notes and in conversations. The album Vast Potential is also vitalized by this charming attitude that takes art seriously, but regards the self with humbleness and humor. A huge potential is inherent in this unusual combination of trumpet, zither and electronics when it is fulfilled with such aspiration and humor. Lorenz Raab and Christof Dienz have succeeded at molding catchy melodies and subtle nuances into sophisticated arrangements and thereby appealing to a potentially large circle of music fans.

Bandcamp Daily  your guide to the world of Bandcamp